Blog and news for www.andrewschultz.net

Ghosts of Reason on new CD

Leave a comment Posted by andrewschultznews on May 2, 2018
Andrew Schultz’s Ghosts of Reason – Symphony No 2, op 76 (2008) has just been pre-released on a compact disc and in digital on-line format. The Naxos-distributed Navona CD is called Reason and Reverence  and is performed by the Czech orchestra, the Moravian Philharmonic, conducted by Petr Vronsky.  More details of the recording at this link.
Links for purchase or listening online:
iTunes:   https://itunes.apple.com/us/album/reason-reverence/1388433411
Amazon: https://www.amazon.com/Reason-Reverence-Moravian-Philharmonic-Orchestra/dp/B07D97K9FG/
ArkivMusic: http://www.arkivmusic.com/classical/album.jsp?album_id=2270192
Naxos Direct: https://naxosdirect.com/items/reason-reverence-450370
Soundcloud: https://soundcloud.com/parmarecordings/reason-and-reverence
YouTube: https://www.youtube.com/watch?v=5_A694nc9MU

A recent review of Ghosts of Reason from Denmark:

“The symphony starts with the delicate sounds of a harp like the gentle swaying of grass in the breeze. The breeze intensifies and so do the tones of the harp to a degree that is almost surprising. The brass instruments have joined in although only the harp seems to be noticed. More and more instruments join in and divinely beautiful harmonies fill the room. There is somehow something unknown about it. The violins are not playing the melody. It is the usually accompanying instruments changing roles and taking over the lead. The tempo increases, but suddenly a strange kind of calm descends over the audience. How can it be that the violins continue playing? And yet, all light tones seem to have suddenly disappeared. The double bass has taken control of the orchestra! “I would like to be able to convey the scorched, rich ochre sonority found in the voices of Aborigines”, says Andrew Schultz about his work. He has definitely succeeded in doing so. We, the audience, are spell-bound by this music that takes us on a tour through the desert with whispering wind, through rich and fertile areas with birds flapping their wings, to the coast and the roar of the ocean.

Andrew Schultz’ music is filled with emotions and unexpected sounds. The overwhelming warmth of the music becomes even more striking when you have experienced the intellectual character of the composer. These are sounds that open up for his true self, showing his inner self, so warm and sympathetic. Andrew Schultz’ music touches the soul and speaks to the mind.” [Michael Schäfer, Klassisk Pt 66]

More about the work at this link.
Naxos information page to purchase the CD 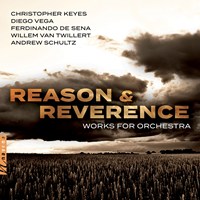 Reason and Reverance represents an aural exploration of our world’s complexities. By comparing and contrasting present triumphs with past regrets, the composers on this album develop a compelling, philosophical reflection of the world we live in. Conducted by Petr Vronský, the Moravian Philharmonic Orchestra delivers a master class in cohesiveness while tackling a wildly diverse, yet wholly complete set of compositions. The album starts strong with Christopher Keyes’ An Inescapable Entanglement. Keyes binds minimalist elements with late 16th and early 17th century forms of concerto to create a controlled chaos of instruments and voices playing distinct parts simultaneously. In his intent to create an antiphonal sound, Keyes employs eight loudspeakers to project the music achieving a thickened, full texture. Red Rock is a symphonic poem commissioned by the Henderson Symphony and its music director, Taras Krysa. The music is based on the interaction of two musical materials, the first, calm and diatonic, presented by the French horns after the introduction and elaborated by the trumpets and the woodwinds; and the second, more angular and chromatic, also introduced by a solo French horn in the second section. Similar to a sonata form, these materials go through transformations and developments in the middle section, and return evolved and reconciled at the end of the movement. The piece suggests a gliding trip over the stunning landscape of the Red Rock canyon, with its sharp geological contrasts, its ever changing shapes, and its surprising colors. Fernidnando De Sena’s Deciphered Reverence explores the idea of divine presence and creates an interpretation through the consistent, triumphant swelling of the orchestra. De Sena’s piece captures the many moods, modes, and colors in the music to translate his vision of life and celebrate its ambiguity and omnipresence. Composed by Willem Van Twillert, multiple styles set the foundation for Branches of Singularity. Multiple developments transitions from one style to another create an enticing and evolving piece. Andrew Schultz’ Symphony No. 2 – Ghosts of Reason ties the whole album together. Slowing the pace of the otherwise energetic album, Schultz’s composition paints a haunting atmosphere by drawing out the wistful bleakness of its wandering melodies.